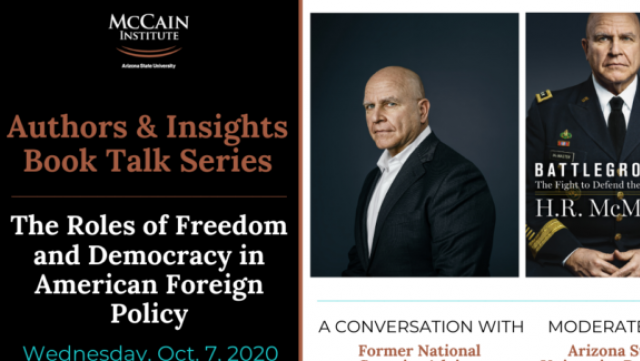 The above video link takes you to https://youtu.be/LshfwOQo5cU

Join the McCain Institute for International Leadership for its next installment of its book talk virtual series on Wednesday, Oct. 7. This event will feature former National Security Advisor H.R. McMaster and Arizona State University President and McCain Institute Trustee Michael M. Crow as they discuss Gen. McMaster’s newest book, Battlegrounds: The Fight to Defend the Free World and the roles freedom and democracy play in American foreign policy.

H.R. McMaster is the Fouad and Michelle Ajami Senior Fellow at the Hoover Institution and Stanford University. A native of Philadelphia, H.R. graduated from the United States Military Academy in 1984. He served as an Army officer for thirty-four years and retired as a Lieutenant General in 2018. He remained on active duty while serving as the 26th Assistant to the President for National Security Affairs. He taught history at West Point and holds a PhD in history from the University of North Carolina at Chapel Hill.

Michael M. Crow is an academic leader and educator, designer of knowledge enterprises, and science and technology scholar. He has been the sixteenth president of Arizona State University since July, 2002. He is guiding the transformation of ASU into one of the nation’s leading public metropolitan research universities, an institution that combines the highest levels of academic excellence, inclusiveness to a broad demographic, and maximum societal impact—a model he designed known as the “New American University.” Under his leadership ASU has established major interdisciplinary research initiatives and witnessed an unprecedented academic infrastructure expansion, quadrupling of research expenditures and attainment of record levels of diversity in the student body.