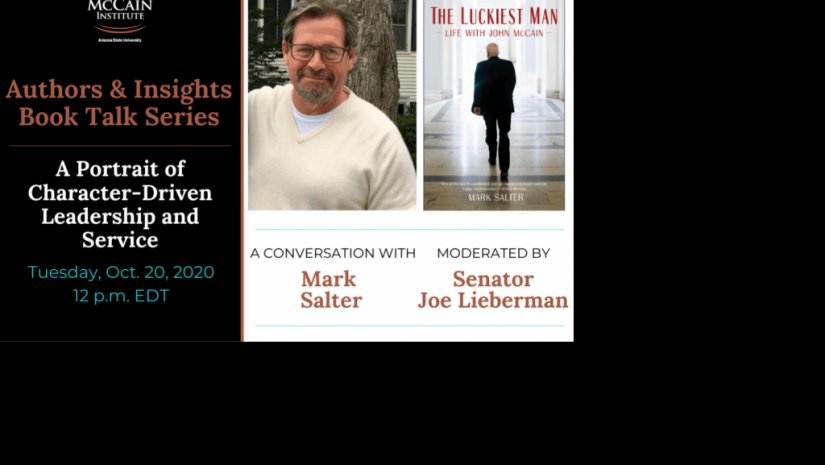 The above video link takes you to https://youtu.be/kHfbGJk7xHo

Join the McCain Institute for International Leadership for its next installment of its book talk virtual series on Tuesday, Oct. 20. This event will feature Senator John McCain’s longtime advisor, coauthor and friend Mark Salter and McCain Institute Trustee and former U.S. Senator Joseph I. Lieberman as they discuss Salter’s newest book, The Luckiest Man: Life with John McCain – a deeply personal and candid memoir of working for Sen. McCain.

Mark Salter has collaborated with John McCain on all seven of their books, including The Restless Wave, Faith of My Fathers, Worth the Fighting For, Why Courage Matters, Character Is Destiny, Hard Call and Thirteen Soldiers. For 18 years, Salter served as Sen. McCain’s speechwriter and advisor in both the U.S. Senate and on the campaign trail.

Sen. Joseph I. Lieberman is now senior counsel at the law firm of Kasowitz Benson Torres LLP in New York. He was a member of the U.S. Senate from Connecticut for 24 years. Before his election to the Senate in 1988, Sen. Lieberman served 10 years in the Connecticut State Senate and six years as Connecticut’s attorney general. In 2000, he was the Democratic candidate for vice president of the United States..