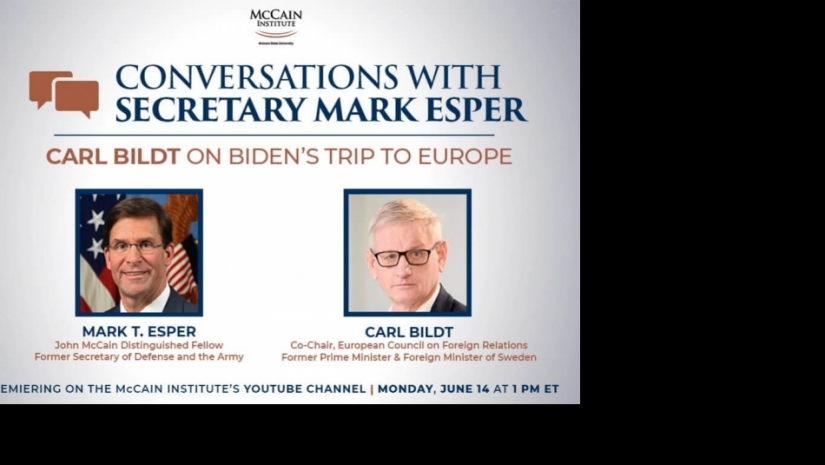 The above video link takes you to https://youtu.be/VRSr2U_3WJI

Join the McCain Institute for International Leadeship as it premieres a new series of one-on-one conversations with Former Secretary of Defense and the Army and John McCain Distinguished Fellow Mark T. Esper. In this first installment, Sec. Esper sits down with Former Prime Minister & Foreign Minster of Sweden and Co-Chair of the European Council on Foreign Relations Carl Bildt as they discuss President Joe Biden’s trip to Europe.

President Biden will make his first overseas trip to Europe to attend the G7, NATO and EU Summits, as well as meet with Russian President Vladimir Putin. The world’s eyes will look to Europe as the trip represents the United States’ potential return to a more traditional approach to its transatlantic alliances. To continue the critical work of Senator McCain on this issue, the McCain Institute seeks to convene experts for a series of conversations related to the future of NATO and how it positions itself to tackle some of the most pressing challenges of our time – a rising China, increasing international authoritarianism, the global plague of disinformation, etc.

This event would be the first of a new public conversation series between Dr. Mark T. Esper, the John McCain Distinguished Fellow and former U.S. Secretary of Defense, and experts on various issues related to challenges and threats to U.S. national security.